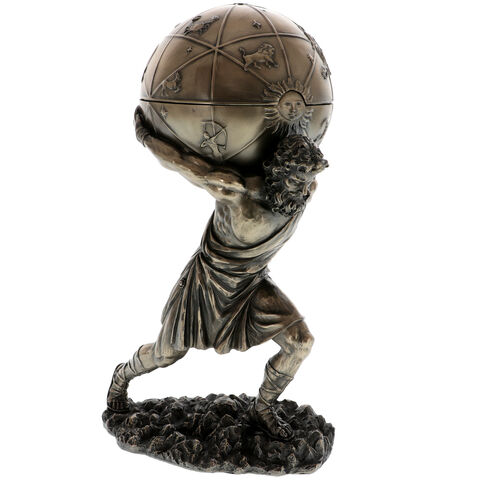 475.00 Lei
Product code
GE-MAC-4608
Delivery time
1-2 working days
Limited stock
0 reviews Write a review
Atlas titanium statuette, a gift for men that carries a deep meaning. Atlas is one of the Titans, the son of Iapetus and Clymena. He participated in the fights against the Olympians. Defeated by them, he was punished by Zeus to carry the heavenly vault on his shoulders forever. According to the ancient Greek poet Hesiod, Atlas is at the end of the earth in the extreme west. Later, he became commonly identified with the Atlas Mountains of northwest Africa and was said to be the first king of Mauretania. Atlas was said to be skilled in philosophy, mathematics and astronomy. In antiquity, it is assumed that he was the inventor of the first celestial sphere. In some texts, he is even credited with the invention of astronomy. The statuette is made of resin, and the globe can be used as a candy box or other small objects. Dimensions: 17x30x13 cm.